Posted on August 21, 2016 by mluongo2017
August, 2016
Quite a bit of progress been made in our search for and identification of Alpine tephra in the Colle Gnifetti ice core since my last post (below)!
Over the past year, after determining that the 1875 Askja eruption in Northeast Iceland was indeed our suspected tephra source, I spent quite a bit of time plotting our particles’ chemistry against numerous reported chemical compositions for Askja tephra. To our pleasure, the data matched exceedingly well with published Askja chemistry and was markedly different than the published values of the only other realistic candidate, the 1845 eruption of Hekla in Iceland.
Confident that we had found something worth reporting, I dove into the process of writing a scientific paper for the first time. Guided by Dr. Kurbatov, from University Maine, and Dr. Pascal Bohleber of the University of Heidelberg, I spent the better part of spring 2016 creating figures and writing the various parts of our paper. This endeavor was certainly a new experience for me, as a scientific paper is not particularly similar to the type of papers that we learned to write in Expository Writing freshman year at Harvard. It truly was a collaborative experience, as I received discrete input from all co-authors and cohesively incorporated it into the final form of the paper.

As of now, our small tephra paper has been submitted to Jökull—a journal that specializes in topics in earth science that pertain to Iceland—and is awaiting revisions. I am very thankful to the Initiative for Science of the Human Past at Harvard for providing me with this opportunity to really dive into an area of research that was wholly new to me and through hard work eventually end up as lead author on a scientific paper as an undergraduate. 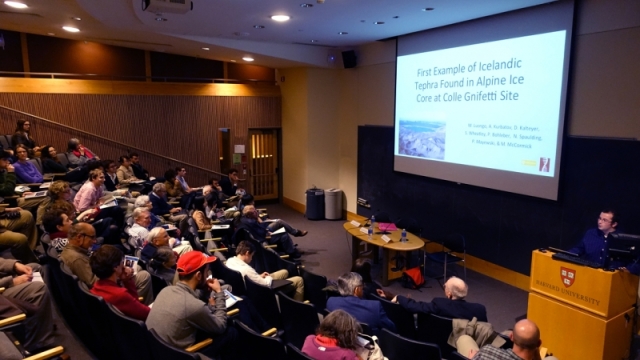 Moving forward, our paper will hopefully show other glaciologists that tephra has indeed made it to the Alps in the past, so that future work can proceed with the goal of saving ice for tephra searches. Identification of tephra and its originating eruption will go a long way in creating absolute dating for paleoclimate proxies, such as alpine ice cores, which should allow us to gain a better understanding of the deposition timelines. Particularly important to SoHP, a more accurate timeline can allow us to synchronize our scientific data with historical data and gain a better understanding through the comparison of the two disciplines. This is a topic I will be exploring in-depth in the next year in my senior thesis.

Since my first blog post in early July 2015, substantial progress has been made in analyzing the SEM ice core data that I gathered during my trip to University of Maine in mid-June. As a quick recap, earlier this summer (2015) I traveled to Orono on behalf of the Initiative for Science of the Human Past at Harvard, to work with Dr. Andrei Kurbatov and analyze the filtered contents from the Colle Gnifetti ice core using a Scanning Electron Microscope. The ultimate goal was to find volcanic tephra particles within the filters which could then be geochemically analyzed and tied to a specific source eruption, in order to provide a means of calibrating the dating of the ice core further. Dating is of the utmost importance, as the Colle Gnifetti ice core could become one of the most accurate records of Mediterranean climate.
When I returned to Cambridge, I spent several days writing an R script (R is a computer language designed for statistical computing and data visualization) to plot the tephra candidates on a geochemical chart. Seeing the geochemical composition of the candidate particles allowed us to immediately disregard certain data, determining they were decidedly not tephra, while also leading us to focus on the particles which held the most potential as tephra candidates. One filter in particular, roughly dated to the middle of the nineteenth century (1830s), had about ten particles with a similar composition that pointed toward potential tephra. Because we had several particles on this one filter, we were able to robustly look at the statistics of the tephra candidates and determine, much to our delight, that we most likely had the first definite tephra finding in an Alpine ice core.
Our efforts now focused in on this group of data, with the sole purpose of finding what volcanic eruption from which these tephra particles originated. After looking through the Smithsonian database of active volcanoes (freely available at http://www.volcano.si.edu) for nearby likely volcanic sources with eruptions in the mid-1800s, I created a list of possible source candidates and looked through published geochemical literature for data against which to compare our tephra composition. It was fairly easy to immediately disregard certain volcanic provinces; as an example, Italian volcanoes have a much lower silica content than our tephra candidates. We looked at volcanoes in the Mediterranean, Turkey, Azores, and Iceland.
Initially, our strongest source matches came from Greek volcanoes. In particular, the Nisyros and Santorini volcanic provinces were tantalizingly similar to our tephra. After discussion with Dr. Kurbatov, we determined that we could count out Nisyros because of differing geochemical signatures, and Santorini became our strongest candidate for a source match. However, there was a catch: the elemental composition of the Santorini tephra that matched our data so well was 3500 years old, and corresponded to a geochemical composition which had not been present in Santorini for several millennia. We obviously had a problem: how could tephra from 3500 years ago end up in an ice core layer which is only two centuries old? After brainstorming rather unlikely explanations such as tephra being blown away from tephra cliffs exposed on Santorini, we went back to the literature and focused our search for a source onto Iceland.
Thankfully, after only a short time searching through geochemical analyses on Icelandic eruptions, we discovered promising geochemical signatures from the 1875 Plinian eruption of Askja in Iceland. After a cursory glance through the elemental composition, I determined that Askja was a strong candidate indeed and plotted our tephra data against this possible source. On a geochemical chart, our data matched almost exactly with the tephra composition from 1875 Askja. Upon further research into this 1875 eruption, I learned that this event was the single largest volcanic eruption in recent Icelandic history and traces of this eruption have been uncovered many hundreds of kilometers away. Additionally, Dr. Kurbatov mentioned that atmospheric circulation patterns already established years ago by Dietmar Wagenbach make it quite possible that air from the Azores passed over Iceland and then looped back down over the Alps. This would provide a physical pathway for tephra deposition at our ice core site.
From here on out, we need to do more quality-checking and plotting of the data to ensure that 1875 Askja truly is our best candidate for the mid-nineteenth century tephra that we found. However, it seems quite likely that this is indeed our source and hopefully this will provide an impetus for future analysis of the Colle Gnifetti ice core and the search for any tephra contained within.